The Hottest LoCo on Earth!

For support or to meet us:
Click here.
Meetings are on irc on the 1st and 3rd Sunday nights at 9PM
Channel: #ubuntu-us-az
Server: irc.libera.chat

How to register your Nick on libera.chat:
You need to send a message to NickServ from the Nick that you want to register.

This will enable you to carry on a conversation in any channel that is limited to registered nicknames only.

The Big Blue Button https://bbb.azloco.net is used for our virtual events as well as presentations when a physical presence is impossible or impractical. 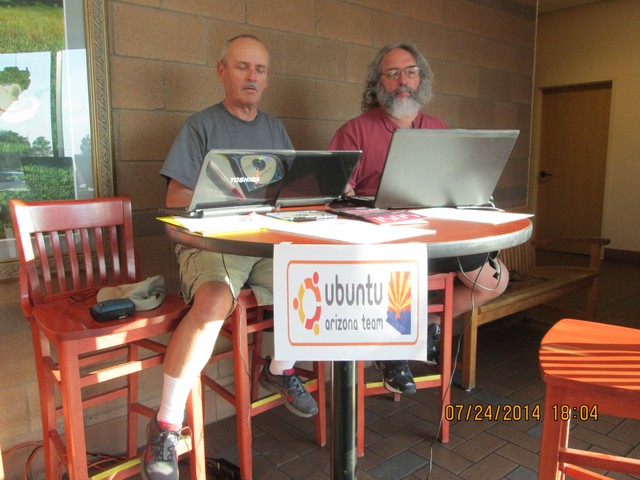 The inaugural Sierra Vista Ubuntu Hour was held from 1730-1830 on 24 July 2014 at the Sierra Vista Public Library foyer. There were four Arizona Loco team members in attendance, three of which drove from the Phoenix area to ensure the success of this inaugural event. Two people stopped by and expressed an interest in having Ubuntu installed on their computer. I will accomodate them this next week. A good time was had by all present before, during, and after the Ubuntu Hour.
Rex

Ubuntu 23.04, Lunar Lobster, will be released on 27 April 2023. It is an interium release and as such will only supported for nine months.

This sites contents licensed under Creative Commons License 3.0 BY SA